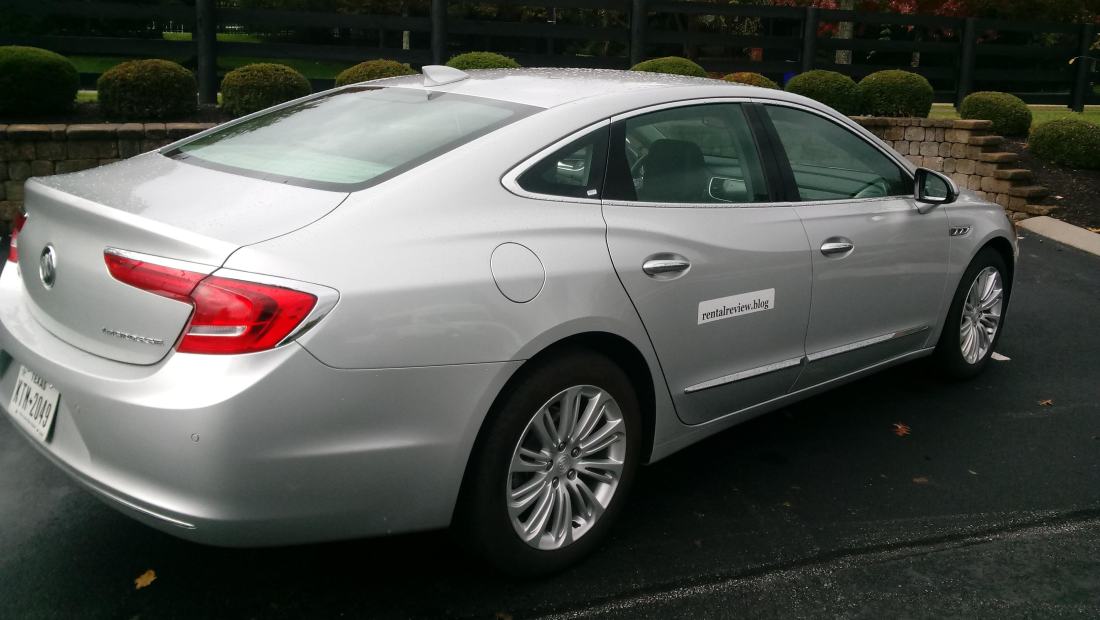 I learned to drive on a Buick.  I learned on a 1981 Buick Century wagon to be precise and that wagon had very little in common with this Lacrosse.  Fast forward 37 years and it’s obvious that Buick has changed their target demographic considerably in nearly 4 decades.  Many years ago GM’s thought process was that Buick was their precursor to Cadillac ownership (think LaSabre, Electra, Century).  If customers were satisfied with a Buick that graduating to Cadillac ownership would be the next logical step. 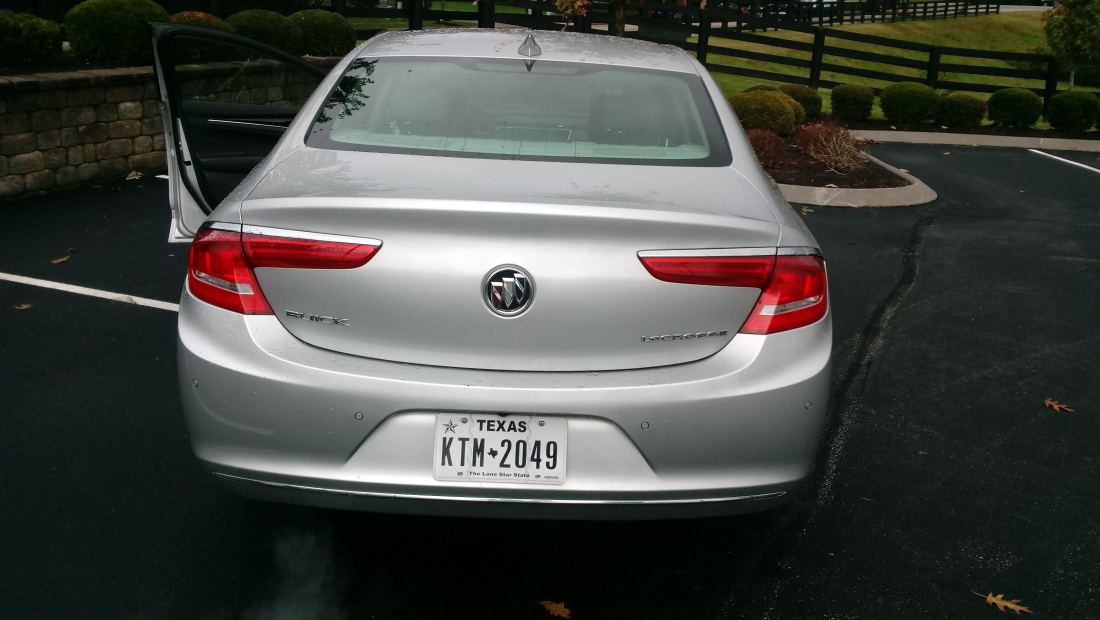 I think the Lacrosse looks great and would hold it’s own in a wide range of vehicles in it’s class on appearance, but . . .

. . . the 2.5L 4-cylinder engine was no match for it’s 3500lb curb weight.  The 24 hp hybrid battery assist was very little help in merging comfortably into highway traffic.  The engine was so weak, I was a little concerned I could get to 60mph by the time I ran out of on ramp.  The optional V6 adds 110hp+ with a claimed 0-60 time of around 6.5 seconds.  I can personally attest that the 4-cylinder is not even in the same league. 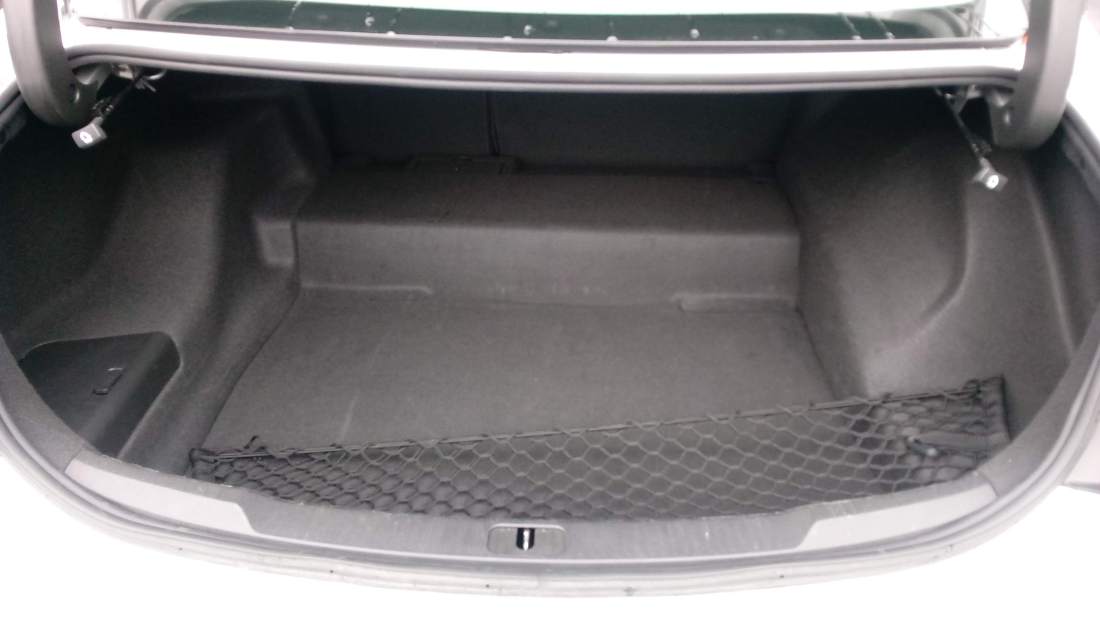 The trunk was spacious enough, but the space robbing ‘shelf’ next to the rear seats ate up valuable cargo room for the hybrid assist battery pack.  The seat release levers for both right and left have no chance of ageing gracefully being so poorly mounted to the sheet metal as shown in varying stages of droop. 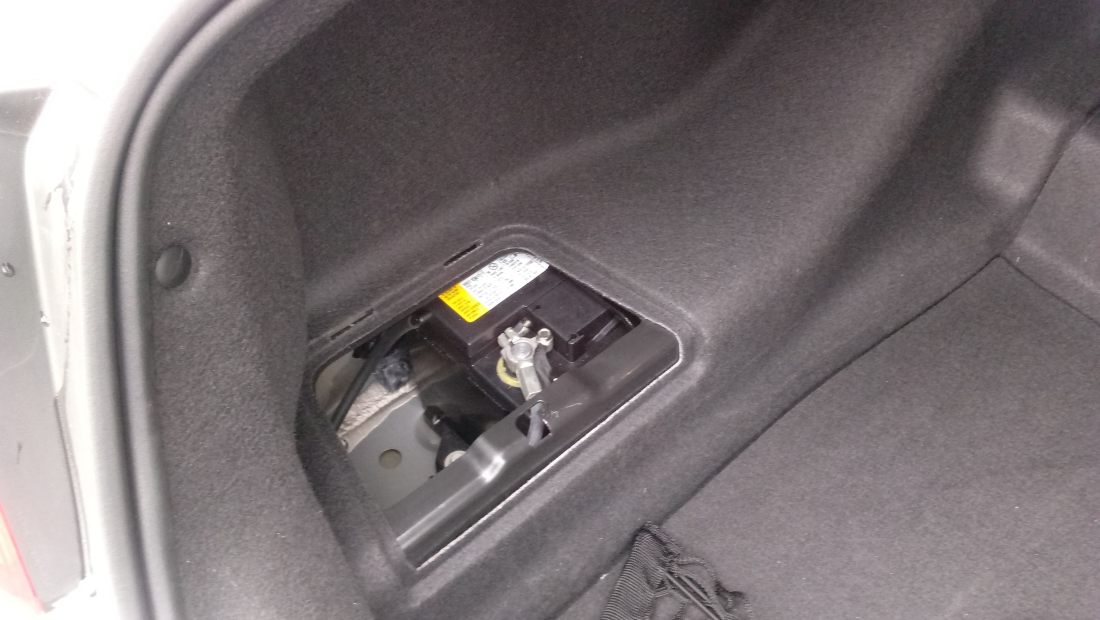 This is a first I’ve seen in Buick’s clear aim at a better front/rear weight distribution (shout out to BMW maybe?).  I’m curious to know how much labor would be involved getting a new battery in with only 1 visible cover plug. 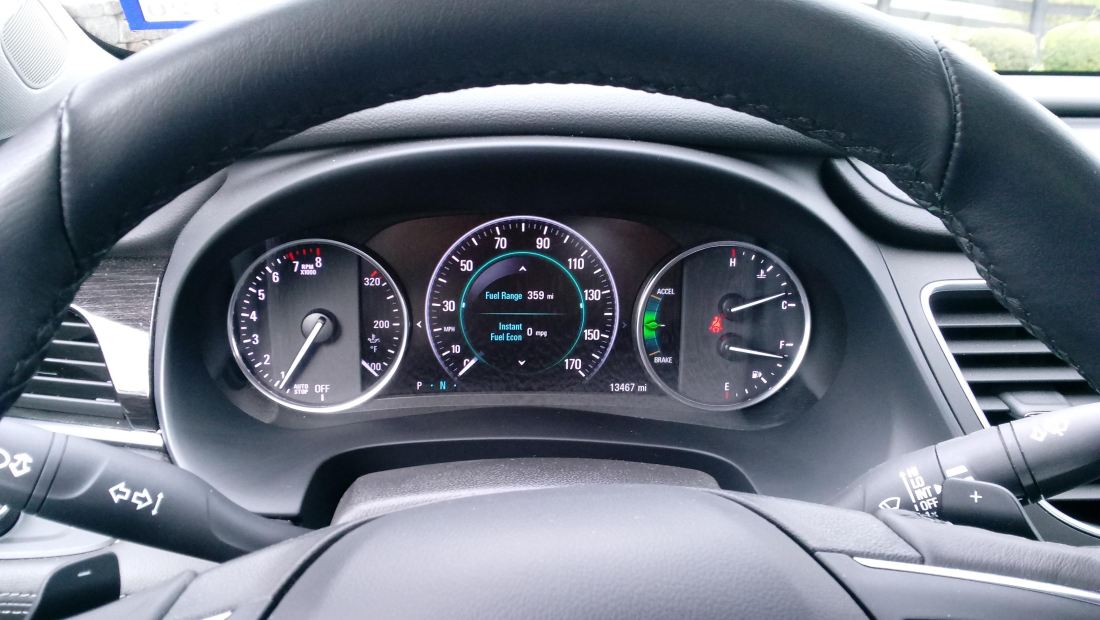 The dashboard layout is in the same field as the Malibu and Encore I recently drove.  The tachometer, temp gauge, and fuel gauge are all analog with real time needles, but the center speedometer is a digital projection that can be changed to various readouts.  I pushed the Lacrosse to about 4500rpm in my temporary time with it and was not  pleased with the noise coming from the engine bay.  I can’t imagine how awful that must sound nearer the 7000rpm redline.  The engine Auto-Stop cannot be defeated.

The inside is typical Buick except the angle of the headlight and fog light switches.  They were at an unusual 45 degree angle and not easily seen in the driving position.  I’ll have to assume that the fog lights were strictly for visibility purposes for other drivers coming from the opposite direction since they had zero effect on lighting in front.

We’ll call the center stack a teeny tiny upgrade from the much less expensive Malibu.  The heated seats were very welcome late night coming home from a house party plus the HVAC system was quick to warm the cabin also.  The “engine power” screen shown above is at idle and the rear battery only lights up under heavy acceleration.  I wouldn’t change a thing in regards to the climate control knobs and buttons. 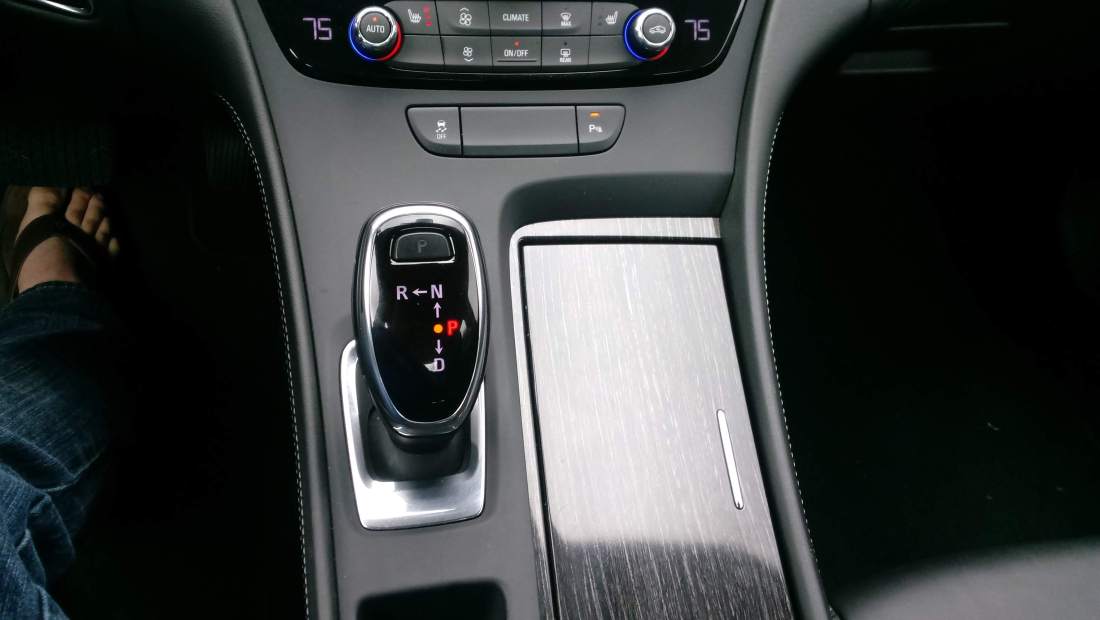 The woodgrain accents of the Lacrosse would be perfect for a vehicle at half the price, but looked horribly cheap in a vehicle of this caliber and price point.  The gear shifter takes a learning curve also.  On several occasions, I’ve had to come out to explain to customers the non-sensical way to get the car in reverse.  There’s a button on the side that you hold in, push the knob up and over to the left.  I’d bet my next paycheck that all Buick salesman have had to do that same tutorial more than once also.  The prominently displayed blank button between the traction control and parking assist defeat buttons houses 3 optional overrides in the higher trimmed Avenir or 1 single override for the Sport model for 2019. 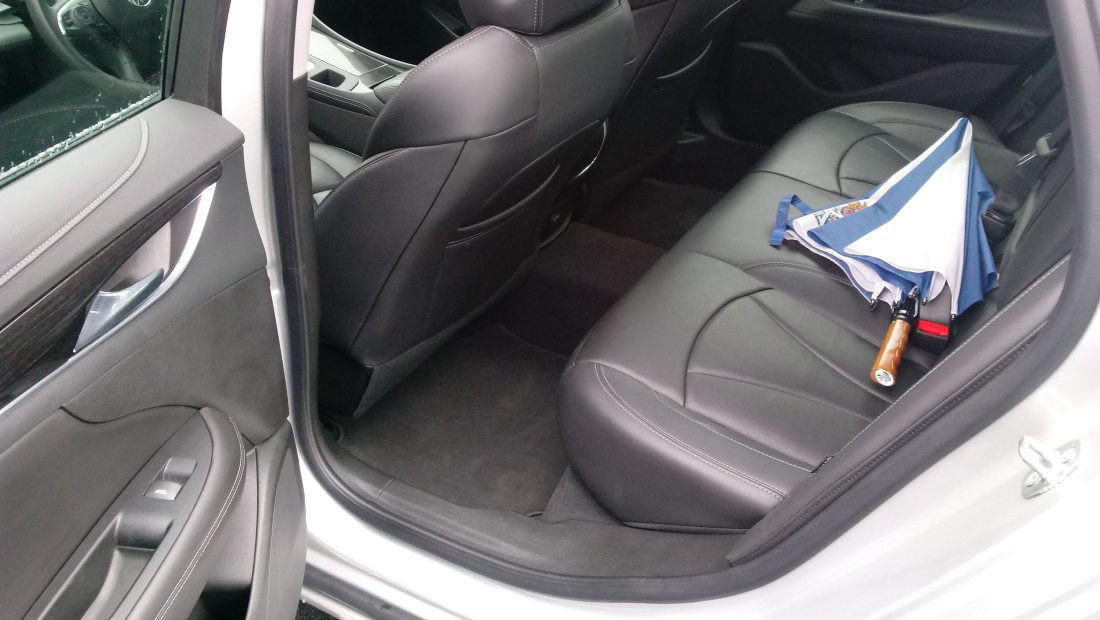 The interior was excellent for comfort and legroom.  The driver’s seat could be fitted for someone 4’10” or 6’10” with ease.  I’d take this on a long highway ride with 4 friends, but would research other more powerful options for a local multi-stop trip.

I took a few sharp curves at a higher than normal speeds to see how well the stock 18″ wheels and tires handled.  This is a Buick after all so I wasn’t expecting 911 Carerra cornering, but it was better than expected as not much wheel squeal going 35mph on a 90 degree turn.

Things of note:
Asinine sticker price of $39,380, but $8000 off is common since year-end is close.
50 more horsepower would do wonders.
Achieved 30mpg is dead-on with the EPA stated 25CITY/35HWY.
$29,000 base model looks identical to a $50,000+ MSRP V-6 AWD Avenir.
Buy it? Rent it? Avoid it?
I’d recommend the Lacrosse to anyone who wants a purchase a smooth ride, likely better than average reliability, and simplistic ergonomics, but only if it can be had for about 25 grand.  I expect to see a lot of these cars on ebay with very low mileage and in excellent condition, much like the bumper crop of 2008 Lacrosse and Lucernes on their now at a tiny fraction of the new price.  I’d much rather rent an equivalent Avalon, XTS, or 300 in this category even sacrificing a few MPG.
Buick if you’re listening . . .
Lay off the ridiculous MSRP’s even though there’s a handful of seniors that don’t know better and would pay full sticker.  The total sales figures for 2017 back me up on this.  A much more capable BMW 4-series is less expensive!
On a scale from 1-100: (1-keep the 1988 LaSabre / 100-trade-in your Grand National)
Buy it now – 30
Buy it later at half the current price – 40
F.E.D. (Fun, Efficiency & Desirability) – 30
Oooh and ahhh factor – 40
Recommended – 50